Is “They” Okay? Is it okay to use “they” for a singular pronoun of unknown gender? 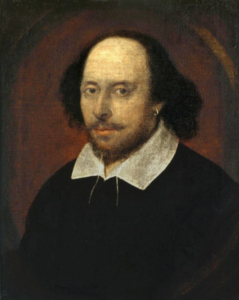 ‘Chandos’ Portrait of Shakespeare in the National Portrait Gallery, London

“There’s not a man I meet but doth salute me

As if I were their well-acquainted friend.”

How acceptable is it to use “they” as a singular personal pronoun? Does using “they” feel natural to you? Does it seem awkward to you? Is the usage of singular “they” ungrammatical? These grammar questions have been discussed for several decades, if not centuries. Is the cultural consensus among editors, linguists, and English teachers shifting?

The December 10, 2015, Buzzfeed article “The Washington Post Style Guide Now Accepts the Singular ‘They”, reviews the influential DC newspaper’s change of editorial policy. The author, Arika Okrent, examines the history behind the Post’s traditional policy banning the singular they in formal contexts. First, the article observes that the singular they is not as ungrammatical as, for instance, the sentence “I didn’t knowed that”. In fact, the author highlights how natural it feels to use they/them to refer to one person in everyday speech and that it has been used for centuries by great authors (Shakespeare, Chaucer, Austen, Swift, Thackeray, and Shaw), even appearing in the King James Bible. According to Okrent, nobody questioned, complained, or noticed the singular they until the production of school grammar textbooks in the 19th century. Therefore, Okrent believes “avoiding it is awkward or necessitates sexist language”.

Is it still unthinkable to use the singular they? According to Okrent, the singular they has been officially approved by the most current update of The Washington Post style guide. She also believes that other institutions may follow the same path. Furthermore, Bill Walsh, the Washington Post copy editor, suggests that it is “the only sensible solution to the English’s lack of a gender-neutral third-person singular personal pronoun”.

What about other opinions? Some “traditionalists” reject the need for using a plural pronoun for a singular noun completely. The Educational Testing Service (ETS), the creators of both the TOEFL and SAT, “uphold” this standard on their standardized exams.

On the other hand, some feminists have suggested another response. In reaction to and rejection of the default for centuries of using “he” in such situations that effectively silenced women, some writers have advocated changing the default to “she” for a few decades – and perhaps centuries. (BTW, why do we still call undergraduate degrees “Bachelor’s” – the term for unmarried males – when a majority of students earning a BA in the US are now women?)

Other feminist writers and language reformers have promoted the use of she/he, sometimes written as s/he. Yet this “solution” remains a solution in print only and an awkward, artificial construction. It’s the sort of nonsense that requires an administrative mandate to gain widespread acceptance on more “progressive” colleges.

What do other sources say? On the short video Is Singular ‘They’ a Better Choice? by the Merriam-Webster Dictionary, associate editor Emily Brewster argues that avoiding the use of the singular they, which is centuries old, can be strange for some of us. Brewster adds that “perhaps, everyone should just do their best in the situations they find themselves in.”

The Washington Post and the informative video by Merriam-Webster clearly share the same opinion about the use of the singular they. Both authorities provide important context, examples, and valuable arguments that support the use of they as a single pronoun.  These experts reflect an increasingly public acceptance of sensible language used by advertisers and politicians for decades. From my perspective, this represents the triumph of common sense and a reject of grammar fundamentalism. (Bias confession: I don’t care much for fundamentalism in language, religion, or politics.)

Context clearly matters. If you are training English students for the TOEFL or IELTS exams, you should emphasize that using “they” for a singular pronoun will cost students points. Hence, it must be avoided on standardized exams. Yet – like many American advertisers and recent Presidents (Obama, Trump, Clinton) – I find the use comfortable and legitimate.

What do you think?

What is your opinion? Do you agree with the current Washington Post policy and the Merriam-Webster video? Or do you side with the ETS ban on using “they” for singular nouns? Do you prefer the alternating use of she and he in singular nouns with unknown genders? Do you lean toward s/he? What about just defaulting to she? Share your thoughts with us!

Merriam-Webster Dictionary. (2011, October 18). Is Singular ‘They’ a Better Choice? Retrieved from Merriam-Webster: https://www.merriam-webster.com/video/the-awkward-case-of-his-or-her

Eric H. Roth teaches international graduate students the pleasures and perils of academic writing and public speaking in English at the University of Southern California (USC). He also co-authors of the ELT fluency-focused Compelling Conversations series. Roth co-authored Compelling Conversations: Questions and Quotations on Timeless Topics in 2006 to help English language learners increase their English fluency. Recommended by English Teaching Professional magazine, the advanced ESL textbook has been used in over 50 countries in English classrooms and conversation clubs. Easy English Times, an adult literacy newspaper, published a monthly column, “Instant Conversation Activities,” based on the book for over a decade. The first specific version for a particular country, Vietnam, was published in 2011, followed by 2012's "Compelling American Conversations". A title for Japanese learners, "Compelling Conversations – Japan", was released in 2015, and a second edition of "Compelling Conversations – Vietnam" in 2016. "Creating Compelling Conversations: Reproducible Search and Share Activities for English Teachers" (2019) reflects his educational philosophy that students deserve a choice and a voice in their English classes. Eric enjoys sharing reflections, resources, and teaching tips on this blog. Many intelligent followers of many related hashtags - #ESL #EFL #ELF #CATESOL #TESOL #ELT - might find enjoy these posts.